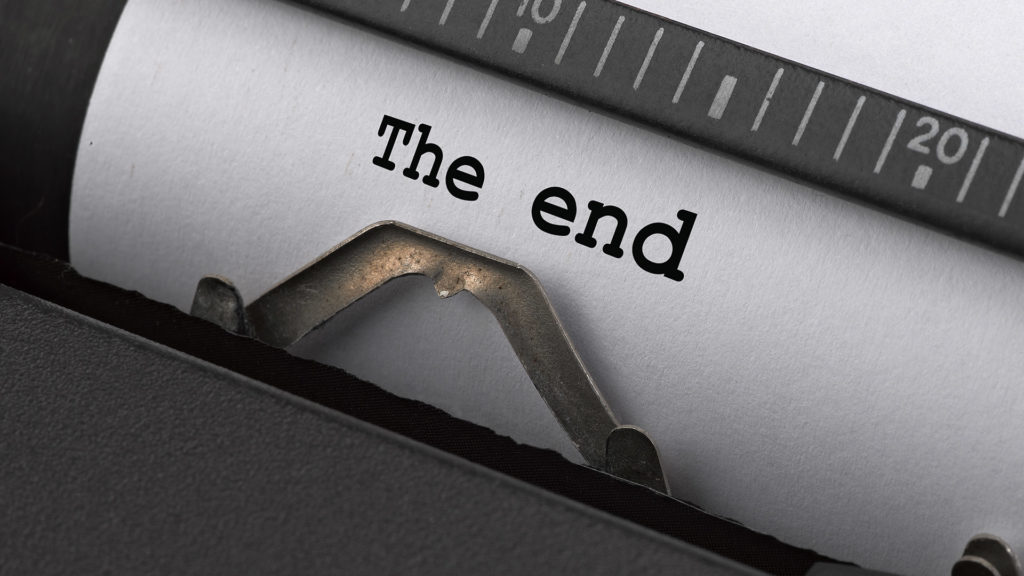 Writing the conclusion to a story can be hard!  First off, the whole story has been leading to this last page, so the sense of responsibility to the story and to the reader is huge.  I don’t want to end the story on a lame note, and I don’t want the readers to feel cheated, as if my story was a shaggy dog joke whose only point was in seeing how long I could keep them paying attention with the promise of a punch line that would never come.

I know writers who never finish a story because their fear of screwing it up is too great.  And I’ve also read some stories that looked like they were going great until they reached their unsatisfying ending, which blew the whole story. *(check the note on this at the end)

And you know what?  Writers’ fears are justified.  The ending IS most of the reason for the story’s existence.  I know, I know, I know . . . the journey is fun too, certainly in a novel there have to be little payoffs along the way, and who hasn’t read a book where they were ten pages from the end and they were just sad as hell that the story was going to finish?  So there’s something to be said for middles too, but the ending still has to be right.

How do you end the story you’re working on you ask?  Sorry, can’t tell you for sure.  Every story tends to its own ending, but I can share some principles that make sense to me.

One way to help with endings is to remember that a story isn’t written the way it is read.  Readers start a piece not knowing the end, so they don’t know why details are there or where they are going.  Writers, however, if they didn’t know the end when they started, they certainly know the end when they finish, and when they revise, they revise with the ending in mind.  That means as a writer, once you get to your ending, you have the chance (the obligation) to go back and set it up.  Writers who know this are effective rewriters.  They know that if the first ending they wrote doesn’t work, that they can write a new one that does and then go back into the story to set it up.  Revision can be everything.  Trust the revision.

Here are three of my favorite endings of all time.  If you go back and look at your favorite stories or novels, reread the ending and ask yourself why they are so good.  You might teach yourself something about finishing a piece.

From “The Fall of the House of Usher,” by Edgar Allan Poe

From that chamber and from that mansion, I fled aghast.  The storm was still abroad in all its wrath as I found myself crossing the old causeway.  Suddenly there shot along the path a wild light, and I turned to see whence a gleam so unusual could have issued; for the vast house and its shadows were alone behind me.  The radiance was that of the full, setting, and blood-red moon, which now shone vividly through that once barely discernible fissure, of which I have before spoken as extending from the roof of the building, in a zigzag direction, to the base.  While I gazed, this entire orb of the satellite burst at once upon my sight–my brain reeled as I saw the mighty walls rushing asunder–there was a long tumultuous shouting sound like the voice of a thousand waters–and the deep and dank tarn at my feet closed sullenly and silently over the fragments of the ‘House of Usher.’

From “Flowers for Algernon,” by Daniel Keyes

Good-by Miss Kinnian and Dr Strauss and evreybody.  And P.S. please tell Dr Nemur not to be such a grouch when pepul laff at him and he woud have more frends.  Its easy to make frends if you let pepul laff at you.  Im going to have lots of frends where I go.

P.P.S.  Please if you get a chanse put some flowrs on Algernons grave in the bak yard . . .

From “Fondly Fahrenheit,” by Alfred Bester

But we know one truth.  We know they were wrong.  The new robot and Vandaleur know that because the new robot’s started twitching too.  Reet!  Here on cold Pollux, the robot is twitching and singing.  No heat, but my fingers writhe.  No heat, but it’s taken the little Talley girl off for a solitary walk.  A cheap labor robot.  A servo-mechanism . . . all I could afford . . . but it’s twitching and humming and walking alone with the child somewhere and I can’t find them.  Christ!  Vandaleur can’t find me before it’s too late.  Cool and discrete, honey.  In the dancing frost while the thermometer registers 10° fondly Fahrenheit.

*(note from earlier) Actually it’s rare that I read a story that is wonderful until it botches the ending.  I think there is a relationship between knowing what you are doing well enough in the middle that the middle is good, and writing a good ending.  You can be sure, though, when I edit, if everything is wonderful until the end, that I will ask for a rewrite.