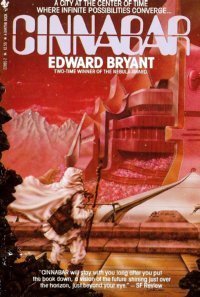 Locus has announced that Ed Bryant passed away in his sleep. Damn. Ed was the first real pro writer I met, and his friendship and encouragement has buoyed me ever since.

I met Ed sometime in the early 80s. He was a pro-writer guest at a writing conference at Colorado Mountain College in Glenwood Springs. This was the first writing conference that I had ever attended, and I was pretty nervous about submitting a manuscript for Ed to read. When our scheduled time arrived, though, I felt confident. After all, I was a long-time reader and an English teacher. Surely my short story would shine with my inner talent! What Ed said to open our discussion was, “If I tell you up front that this is unmitigated shit, then everything I say afterwards will sound better, right?”

He decided by the end of the thirty minutes that the story wasn’t quite “unmitigated,” but it still was terrible.

I was miffed by the critique, so I rushed to the nearest bookstore and bought the only Ed Bryant book they had, CINNABAR. My figuring was that when I read his work, I’d find out what a hack he was. But CINNABAR was brilliant. And he was absolutely right about my story.

Once I started going to conventions in the mid-90s, I ran into him all the time. He always bought my latest book and had me autograph it. He even came to a couple of my readings when I was in Denver. When we went to Chicon in 2000, we convinced each other that we both had to have an expensive, black bomber jacket with the Chicon logo on it. I saw him wearing his last year.

Ed was way kinder than he had to be. Like many other people, certainly everyone who attended MileHiCon and saw him regularly, I will miss him. His contribution to science fiction and fandom was huge.