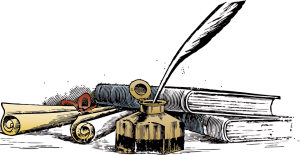 The frequently wise Richard Parks did a nice post on relating learning to play the guitar to becoming a writer.

I think just about anyone who is good at something, who is also not an elementary school kid being patted on the back, flinches a little when told, “You’re so talented.”  Almost everyone who has become way better than average at any activity, whether it’s painting, playing the violin, running long distances, or writing, got there through a lot of applied effort.

“Talented,” in this context sounds like “You have a gift that was given to you.”  It’s possible that the person you’re saying it to will feel you’ve demeaned their achievement rather than praising it.

The secret for most is that a great deal of the effort that allowed them to create the work others admire now was fun then, and a great deal of that effort may have happened before the person even recognize that it was “effort.”  For example, one of my best friends is a fine artist.  He’s sixty-three and sells some of his art to large organizations who want public art installations.  That means that when he sells a piece, he gets a good-looking paycheck, but he also has to work a long time to produce the piece.  I’ve heard people tell him that he’s “talented,” but he tells me that even when he was a little kid, he was sketching all the time.  He didn’t do it because he thought it would pay off by making him an artist later, or that he’d be selling his work later in life.  He drew because he enjoyed the act of drawing.  He still sketches every day.  He likes the activity.

For many writers, the “effort” that happened before they even knew it was effort was reading.  For me, I started reading early, and I was one of those kids who burned through several novels a week.  I read during classes at school; I read at family gatherings; I read when riding in the car.  I read just about in any location and at every occasion.  I didn’t know that all that reading would be the background work that would help me as a writer.  I did it because it was fun.

I don’t think I am saying that to be good at something later in life that you had to start doing it as a child, but I do think that whenever you start, you’d better find that you like doing the activity.

You’d better be doing it because some part of what you’re doing fulfills you.

And for crying out loud, if you admire someone’s art, don’t attribute it to talent: recognize their effort instead.